November Tot School - Orange and Brown (with some Fall inspiration!)

Well, I am finally getting around to posting about our Brown/Orange weeks!  Since I didn't have as large a variety in the two colors, I decided it would be ideal to combine them. Add to that the season change, and Fall fit right in with the colors!

It worked out to just devote the entire month of November to the brown/orange theme with some Fall inspiration. I also wanted to keep it simple because it turned out to be a very busy month! Due to that, I only started with three main trays/activities to see if 'less was better' with Buddy Boy.

Without further ado, here are the trays:

The first one was oh, so simple: A basket of brown and orange Unifix blocks :) 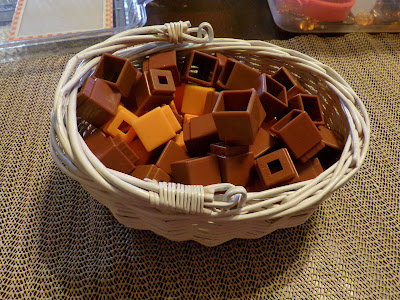 The second was a small puzzle that I found at the Dollar Tree in a 3 pack. This one just so happened to be a brown and orange monkey. 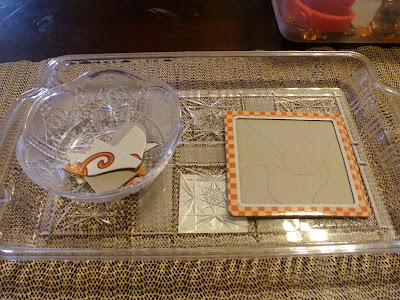 He also had a brown/orange/Fall sensory box! 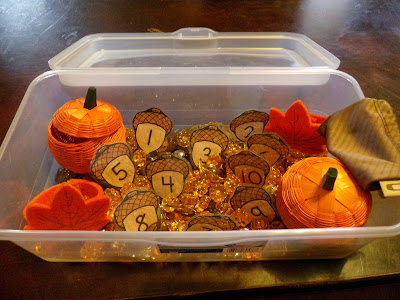 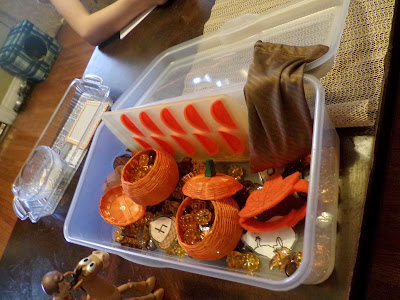 The next week, I added to the sensory bin :
ORANGE silicone ice cube tray (Target Dollar Spot)
BROWN Horse (Bullseye - Toy Story collectible)
And of course, who can take the trusty steed with the cowboy? Woody had to join in with his BROWN hair and BROWN cowboy boots and BROWN hat!
BROWN horse puzzle piece
ORANGE Tiger puzzle piece
I also added some orange carrot erasers, but they somehow didn't make it in to a picture! 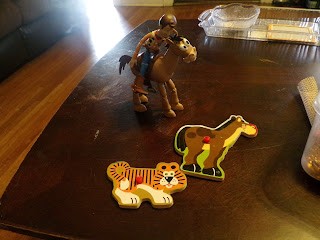 Of course, he still loves the sensory boxes/baskets the best! Miss Priss and Bug enjoyed getting in on the action. It was fun to see the different ideas they came up with.

Many times he spent a lot of time filling the pumpkins and dumping them out. Then, with the help of sisters' good idea, he would fill two and we would talk about which one weighed more than the other, etc. 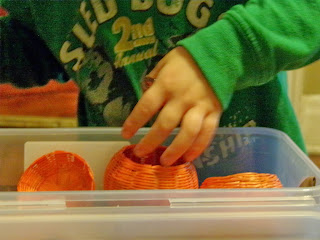 After I added the ice cube tray he enjoyed a lot of one-to-one correspondence with the leaves, pumpkins, gems, and carrot erasers. 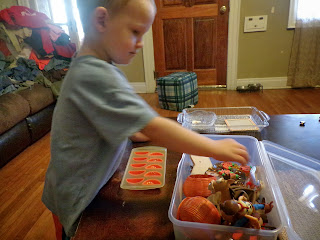 The most played 'game', however, was a great stereognostic activity.  Buddy (and Miss Priss and Bug) would grab a handful of leaves, gems, and pumpkins. Then, after placing them in the bag, they would tell me what they were going to find, or have me tell them what to find, and use their sense of touch to find the right item. Buddy boy mastered this very well, and would often find something in the bag and tell me what he had before he pulled it out. 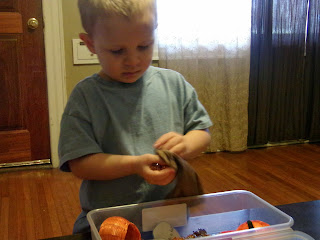 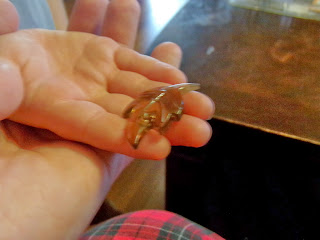 He didn't choose the puzzle as often, so I was glad to see him want to do it the day I was taking pictures :) 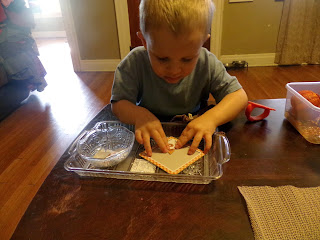 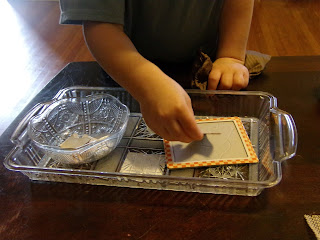 The level of difficulty on this one was a little harder than some he's done in the past, and I questioned my decision a little, but of course, he surprised me like always! He was VERY proud of himself for finishing it up so well, and repeated it several times this particular day after figuring out where the pieces went. 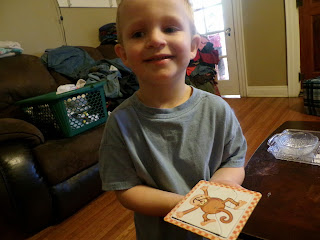 (side note - yes, that IS a laundry couch in the back ground! I hope I'm not the only mommy who finds it very easy to keep the machines moving, but not always easy to stop what you are doing and put everything up in the  middle of the school day. With five kiddos and a husband, waiting until night time to do laundry is not always a workable plan, either!) 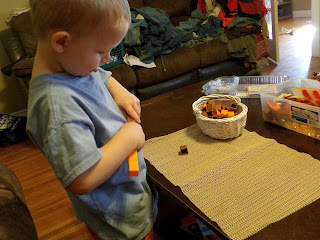 I only managed to get one picture of him working with the blocks, but they got a LOT of use! He has really enjoyed building 'towers' here lately, which was the inspiration for this oh-so-simple basket. He was able to distinguish between the colors with them put together, many times saying "You build a brown tower, and I will build an orange tower" or vice versa.

I was going to add more in to what I offered him - I had more of each, but I realized that what he had, he was enjoying, and he wasn't bored or acting as if he wanted something different. It was quite the busy month for us as a whole, so have less to choose from ensured that he was going to be able to enjoy each activity, and not get frustrated when we had to spend a little less time with tot school than normal. It was also very easy for him to enjoy when I was working with the others and not able to be right beside him the entire time (I try to make sure I am right there working with him during tot school - that is the goal and it's generally easy to do - but sometimes I just get a little busy trying to work with the others as well, and it's nice to know that he can work with his trays independently!) That's all we did for our orange/brown tot school weeks! :) I know it sounds simple, but sometimes - simple is best! :)

I hope you are enjoying your tot and having a wonderful Fall!

*LINKING UP TO TOT SCHOOL GATHERING PLACE AT 1+1+1*

My Experience At A Montessori School - Primary

I'm going to do a small series on my experiences at the local Montessori school in my city. If you live anywhere close by a Montessori school, and you are homeschooling with the Montessori method, my best suggestion to you would be to try your best to have a tour of the school, and inquire as to whether you would be allowed to observe the classroom(s) at all. I can honestly say that being able to talk 1-1 with the teachers and observe in these classrooms has been some of the most important learning experiences for ME as I began my Montessori teaching journey.


The first time I went to visit, my main focus was on watching the primary class. At the time, I didn't think I would be completely changing the way I taught - I just wanted to find something for my little ones to do while the older child were doing their school work. I'm going to share a little about the environment, the children, and the teacher.

I walked in and it didn't take long …
Read more

Not just any new puppy, but a rare singleton. German Shepherds usually have litters of 4-8, so we were so surprised not only by an unexpected puppy, but to have only 1!

Our female GS, Sammie, has had two litters previously. The first was a litter of 6, and the second a litter of 8. She was NOT supposed to have a litter this time, but nature and dog's design generally does it's own thing.

So we have this one, fat, roly poly puppy! Our children are in love :) They were convinced that, since she was the only one, she was meant for our family forever. Of course, this isn't the plan, as it hasn't been ever, so she will be well loved and spoiled before finding a forever home.

Did I stress SPOILED enough? I mean, really? Of course, who could resist this sweet little chubby puff of fur and fat?

We pour a ton of love and care in to our puppies, and enjoy them immensely before they go on to their new, forever, ho…
Read more

My Experience At A Montessori School - Upper Elementary 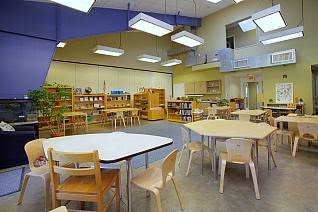 THE UPPER ELEMENTARY CLASSROOM
photo credit - White Rock Montessori
My first look at the U.E. class was interesting - a couch. There was a couch in the classroom. Not something that is shocking to a Montessori teacher, maybe, or a homeschooler in general, but very different from the average public school.  The comfort level was apparent, and very homey.  There were some similarities to a public school classroom, though -  a few full size school desks and tables in the classroom, surrounded by the materials needed for U.E. and LOTS of books! There is only one U.E. teacher in the school here, but the class size is small - probably only around 15 students, give or take a couple.  I got my first look at the decimal board and decimal checkerboard here, as well as the advanced fraction materials.  I also had the curriculum explained to me a bit, in how they g…
Read more