Even if that means, the best you can is to blog a few times a year, and always tell yourself you'll pick it back up full time....eventually. Richard Bach said: "A professional writer is an amateur who didn't quit" My friends, I claim that for my outSTANDing blogging skills ;) (as I type this, I realize I'm searching for the emoji buttons that surely should be somewhere by now hahaha!) We didn't quit. I mean, I obviously haven't been around this blog in what feels like eons. We are still here, though, alive and kicking!  KLW is going in to the 10th grade this year. When did someone come in my house and allow that to happen? Whoever did is going to get a tongue lashing from me, because this teenager is just a few years from adulthood, and I don't know how I feel about it, to be honest with you.  She's gorgeous.... Kind of quirky.... Has some killer selfie skills She's tall.... really REALLY t
1 comment
Read more

Well, we had a surprise about 3 1/2 weeks ago.... a new PUPPY! Not just any new puppy, but a rare singleton. German Shepherds usually have litters of 4-8, so we were so surprised not only by an unexpected puppy, but to have only 1! Our female GS, Sammie, has had two litters previously. The first was a litter of 6, and the second a litter of 8. She was NOT supposed to have a litter this time, but nature and dog's design generally does it's own thing.  So we have this one, fat, roly poly puppy! Our children are in love :) They were convinced that, since she was the only one, she was meant for our family forever. Of course, this isn't the plan, as it hasn't been ever, so she will be well loved and spoiled before finding a forever home.  Did I stress SPOILED enough? I mean, really? Of course, who could resist this sweet little chubby puff of fur and fat?  We pour a ton of love and care in to our puppies, and enjoy them immensely bef
1 comment
Read more 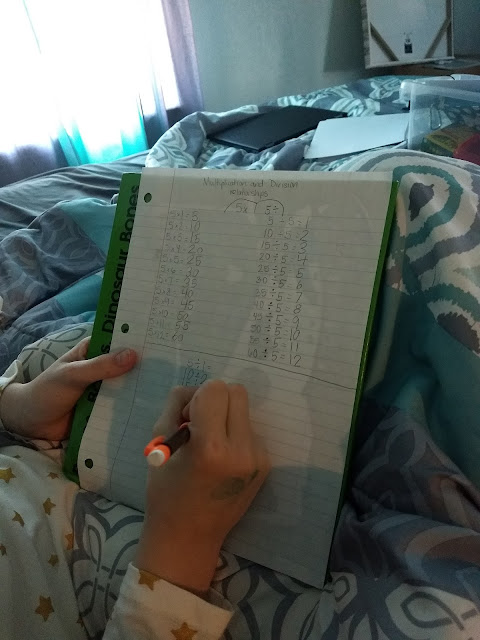 "This isn't so bad." - SW It wouldn't seem like such a big deal to hear that, except this is SW. She balks at everything new, and most things she's done before that were new. I know that sounds crazy, but if you just knew this girl. So this week, we've been working on the relationship between multiplication and division, and how you can use one to remember the other.  We had talked about this a little before our extended winter break, but since it had been a while, she may have had a slight breakdown when I reintroduced it. Thankfully, it was short lived! We are working through reviewing multiplication facts and discovering the art of division :) And honestly, she may be one of my most hard to teach at this point in life because of her tendency to be afraid of something new, despite the fact that she is ridiculously smart and almost always catches on immediately (even if she pretends she doesn't 'get it'
6 comments
Read more 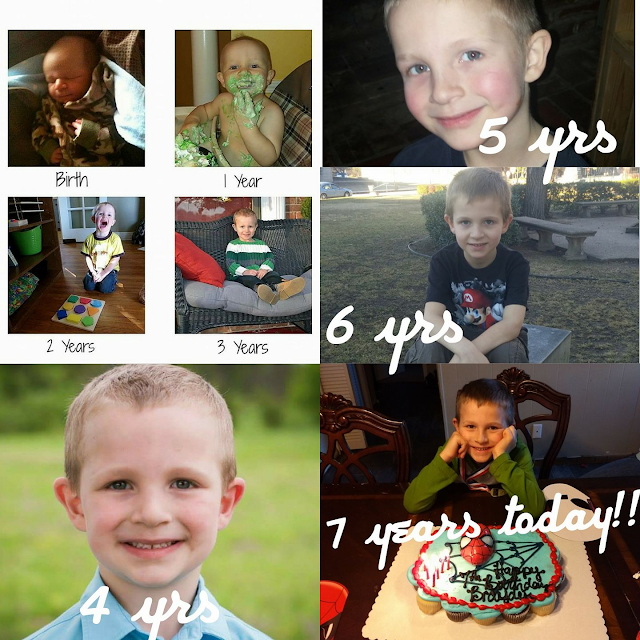 Someone turned **7** today! This funny, mischievous, sometimes ornery, loving, tenderhearted boy turned 7 today! We celebrated yesterday with cupcakes, ice cream, and lunch out, and then again today with.....staying home from church because of a virus! Ugh. Some days you feel like you've got it all together, and some days you just don't. No matter what, however, my children can always bring a smile to my face! As much as it makes me sad to see them grow up, I also look forward to everything the Lord has for them - and us - in the future! Happy Birthday BW!
Post a Comment
Read more

Learning to Read for the Last Time 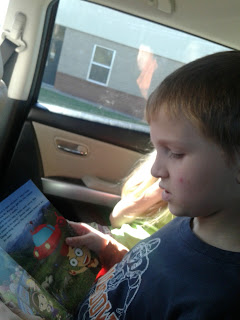 Looking back on this year..... This guy learned to read this year!  Actually, he started during his Kindergarten school year, but we did a lot of Montessori activities with reading before we moved to one of my favorite purchases of all time - the  Abeka Reading Handbook . I found this little handbook when AW was learning, and struggling, to read at BW's age. Something about this book, and definitely the approach it takes, clicked for him. It has had as much and more success with the three little readers after him that also used it to learn to read.  He absolutely loves to read now, and will read everything he can find, regardless of how big or small it is! His current favorites are our Usborne Shine-A-Light books! These are the three he got for Christmas: Construction Site On The Space Station On The Train (No, these aren't affiliated links or anything! I linked to my friend's Usborne site, which is who I use for my Usborne purchases! We
1 comment
Read more 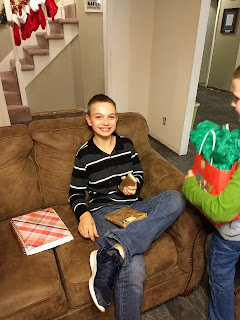 Several years ago we started a fun tradition of a brothers/sisters gift exchange. It's really been neat to see this evolve from us simply giving them X amount of dollars, to them earning the money each year, and see how much they look forward to it and how much thought goes in to these gifts! This year, BMW and AW had each other's names, and BMW had a great time trick wrapping her brother's gifts with all the clear packing tape she could wrap around those gifts (which were a Lego movie and candy to eat while watching it). AW got his sister all the earrings a little girl's ears could ever need, which is her newest found love, and a sign that my little tomboy girl is growing up too fast on  me!  KW got SW baby doll clothes and the sweetest little car seat, both things which speak to her baby-loving heart so much. I promise, SW is one of the most tender-hearted girls you will ever meet, especially when it comes to babies. We can't make it through
1 comment
Read more

Reintroductions Are In Order 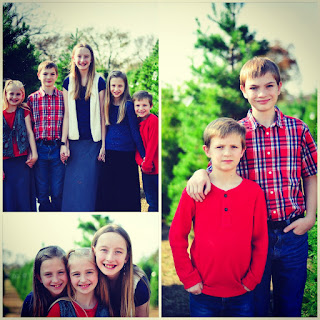 Since it has been SO long, I feel like I should reintroduce the gang to you :) Older faces also get to have new names! Well, not exactly new names. It's more so that their old blog nicknames just don't seem to fit anymore. So we are going a different route from here forward - get ready for something huge! - initials! Hahaha! So that really didn't need a lot of thought, but it's what works now and will flow a lot smoother while I'm writing/typing, so there ya go. :) Hello! From babies to big, gangly, growing and gorgeous! I have tried and tried to explain to them what happens when they insist on growing up - that the end result is making their mom and dad so much older, as well - but they refuse to listen to reason. So  now we are in this stage of life where everyone has exploding growth spurts, emotions and hormones are slightly raging at times, and yet the experiences and dynamics of this family of mine are truly amazing.  KW This oldest girl
1 comment
Read more
More posts